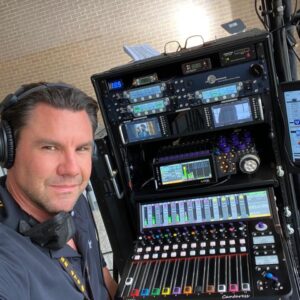 Brett Jennings Murray started his interest in sound at a young age, as a musician. He began mixing sound for student films, live music, and theatrical productions for his high school, Bayside Academy in Daphne, AL. In 1992, as a high-school junior, Brett took a leave from school to work on his first feature film, “Under Siege”. There he met Sound Mixer, Scott Smith, and cemented his enthusiasm for feature film production sound.

Moving to Los Angeles in 1996, Brett furthered his education and pursued musical interests. In 2003, he returned to the south and resides in Atlanta, GA. Pursuing several diverse careers since 2003, Brett always returned to his first passion, production sound. Concurrent with those other pursuits, he co-founded, produced, performed, and toured regionally, as half of Travis-Murray Music Group.

Brett’s work on the “The True Don Quixote” earned “Best Sound Award” recognition from The New Orleans Film Festival in 2018.

Brett is an active member of the Cinema Audio Society (CAS).